So how much does a Registered Nurse make, what is the average RN salary, the highest paid cities, states and industries?  Below you will find all of the answers laid out clearly in easy to read tables and charts.

Finding all of the relevant figures can be a bit of a task – so I have put everything in one place – easy to find and easy to navigate!

You can also check out the Nurse Salary by State page for a deeper look at Registered Nursing salaries in each individual state in the U.S. – it breaks the information down into Metropolitan and Non-Metropolitan areas and employment by industry.

Easily find the important details for Your town, city and state – when someone asks how much do nurses make – you have all the answers.

Have a look at how this compares to the national average wage figures.

A general split can be seen – the highest paid states tend to be West Coast and North East centers of population (also with high cost of living).

At the other end of the payscale for nurses – Puerto Rico is the lowest paid state with an average RN salary of $34,630 – not so great if you live there! 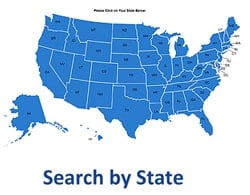 The large variation can in part be explained by simple supply and demand influences – but also cost of living variations. We look at several factors …. if you keep on reading!

You can click on the map above to find Registered Nurse salary information in all states – here you can select your own state and see all the relevant data – highest paying areas, employment figures and more.

California’s metropolitan areas are topping the tables again here. San Francisco, Salinas, San Jose and Oakland are amongst the highest paying cities for Registered nurses in the country – well above the average salary rates nationwide.

Number of Registered Nurses Employed in the United States

The total employed figures across all states stands at 2,906,840. The chart below shows the top 10 states by total number of RN’s employed. California employs the most RN’s – which helps explain the high wages for nurses in that state. Texas, New York and Florida all have high numbers of RN’s.

RN’s can find employment across a fairly wide range of industries – not just in hospitals. Have a look at the top paying industries below – you can see some of the highest paid nursing jobs.

The career outlook for Registered Nurses is very strong with expected growth of 19% (all careers growth is estimated at 11%) between 2012 – 2022. According to projections from the Bureau of Labor Statistics by 2022 there will be an increase in the number of Registered nurses of 526,800 – yes, over half a million! That’s a lot of new nursing jobs for the near future – definitely a career with good prospects.

Obviously not all RN’s earn the same. Wage levels vary quite a bit depending on experience, years in the job, level of training , industry and location etc. In this next section we will look in more detail at some reasons for such a wide salary range.

The table below will give you an idea of the range to expect. The figures show the average wage earned by the top earning  10% and the lowest paid 10% of registered nurses. It is a useful way to see the potential earnings overall.

Starting Salaries for a RN

Although there are no official statistics for starting salaries for registered nurses it stands to reason that they are among the lower paid ranks. Using the salary scales in the table above you can safely say that they will earn in the bottom 10% depending on location and healthcare industry.

Most newly qualified rn’s will earn between $45,000 and $60,000. These estimates should be adjusted based on the average salaries in your state.

The level of education obtained by a RN will directly influence their earning potential. Of course this makes sense when you consider the different qualifications held by working nurses.

ADN – Associate Degree in Nursing – takes on average 3 years to complete. Although still accepted in many nursing jobs, it will be viewed as inferior to other qualifications and pay will usually be less especially when starting your career.

BSN – Bachelor of Science in Nursing – takes 4 years to qualify normally. Now seen as the standard entry qualification for RN-s by most employers. Over 50% insist on at least a BSN and over 80% prefer this level of degree. BSN educated nurses are in the top 25% earning registered nurses today.

MSN – Master of Science in Nursing – can take 6 years although usually taken as a bridge program. This degree is usually taken to further your career towards an Advanced Practice Nurse (APRN). Needed to become Nurse Practitioners, CRNA’s, Nurse Midwives and Nursing Informatics.

DNP – Doctor of Nursing Practice – this is a relatively new program also leading to APRN careers and also management and leadership roles in nursing.

For students starting out who want to become registered nurses it makes sense to aim for a good BSN course – giving you the best opportunities for earning and career progression in the future.

In such a varied career as nursing, experience will always be a factor in salary scales. Many hospitals have time in post factored into their salary scales. You can expect a RN with years of experience to earn substantially more than a new recruit! Let’s hope it stays that way.

It is pretty obvious from the figures that the state, city or region you work in will have an impact on your earnings potential. Even when taken with experience and education – some states just earn more than others. Outside factors are at play here too such as cost of living, which we go into later on.

Not all RN’s are equal and not all work directly with patients in hospitals. To the uneducated it can be surprising to learn some of the jobs registered nurses can do outside a hospital environment. They are employed across a wide range of jobs and industries – and this can be reflected in their salaries.

Shockingly, studies have shown that there is a gender pay gap between male and female RN’S. Male nurses do earn more than female nurses – but is that the whole story?

It is difficult to quantify accurately due to the wide range of salaries across the career. It has been noticed that male RN’s tend to have higher degree qualifications, tend to work in specialist roles and of course are less numerous than their female co-workers.

Some like for like comparisons have shown that men are earning more than women in the same positions – looks like wages difference between the sexes is a thing!

When you drill down into the salary data across the United States it probably shocks most people to see the wide variation of figures. We have looked at other influences such as experience and education and the effect they have on nurses wages.

To understand why one state or city is so different from another we need to consider another major factor – Cost of Living. Most cost of living indexes look at a range of cost – usually covering rent / housing, transportation, consumer goods, utilities and healthcare.

These costs vary across the country and also between cities and rural areas. I think we are all aware that rent in Manhattan will cost a lot more than in rural Iowa! This is extremely important to consider when judging where RN’s have the best earning potential.

It isn’t enough to know that nurses in California have the highest salaries – you need to consider how much of that extra income they need to spend in order to live there.

There are numerous different indexes available online but most show the same general trends with minimal variations. ref: http://coli.org/

Don’t forget to check out our pages for Nurse Practitioners, LVN or LPN salary and general nursing careers salary information – have a good look around.